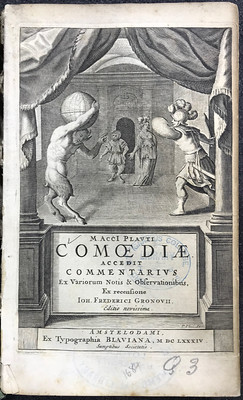 As part of Loyola University Chicago’s 150th Anniversary Scholar Series, Laura Gawlinski, Associate Professor and Chair at Department of Classical Studies at Loyola, and Christopher Polt, Assistant Professor of Classical Studies at Boston College, will present the 2021 John F. Callahan Lecture, “’urbs procul est, urbs magna, Chicago’: Latin Drama, Jesuit Education, and the 1893 Chicago World’s Fair,” on 22 March 2021 at 5 pm Central. The talk’s description argues that performances of Latin drama, a mainstay of a Jesuit education, took on new significance in the late nineteenth century as a means “not only of student formation, but also of self-promotion and self-defense” during a contentious time in American Catholic history. It should be a fascinating talk.

Profs Gawlinski and Bolt’s talk raises the question of what Latin dramatists the Jesuits at St Ignatius College (forerunner to present-day Loyola) had on their library shelves one-hundred and fifty years ago. Latin drama, according to classics scholar Susanna Braund, encompassed multiple genres (including tragedies, historical dramas, comedies, and even pantomime) and was written over the course of several centuries, beginning in the 3rd Century BCE and continuing into the Imperial Period. Much was written and performed, but only a fraction survives today. Three dramatists, in particular, were collected by the Jesuits at St. Ignatius. They were (in chronological order):

The works of other Latin dramatists whose work survives in fragments, such Livius Andronicus (c. 284–204 BCE), tended to be preserved in anthologies.

Year 6 is the only one in which Latin instruction is not prescribed. While no works by Latin dramatists are explicitly stated in the 1870 Catalogue (or the 1599 Ratio), the Ratio does empower the rector of the community to oversee theatrical productions. “Tragedies and comedies, which are to be produced only rarely and in Latin, must have a spiritual and edifying theme. Whatever is introduced as an interlude must be in Latin and observe propriety,” the rules state, although they are quick to add, “No female makeup or costume is to be permitted.” (Farrell, 1599 Ratio, p.17) 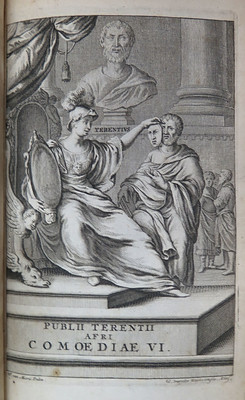 From a 1686 Amsterdam edition of Terence’s Comedies.

Most of the works by Latin dramatists can be found in the Poetry section within the Literature Division of the college library. The Librarian divided the original library into six sections (pantology, theology, philosophy, law, literature, and history). The Literature Division is further subdivided into seven sections, a few of which map onto the curriculum of the Ratio Studiorum. Works by Latin dramatists were collected more often in Latin than in translation, although there is some evidence of the latter. The Poetry section is not limited to what we might think constitutes the genre of poetry today. Jesuits embraced oratory and poetry for their use in the development of the power of self-expression, although they valued oratory, according to the Oxford English Dictionary, “the formal art of speaking eloquently or persuasively,” more than poetry, “imaginative or creative literature in general.” (1599 Ratio – Rules of the Teacher of Rhetoric 1) Thus, works by Latin dramatists sit alongside epics, fables, and poetry. Moreover, they are often outnumbered by them, as the St Ignatius College Jesuits collected more Virgil (18 editions), Horace (14), Phaedrus (12), and Ovid (8) than Plautus (5), Terence (4), and Seneca (2). The Poetry section even includes works written in Latin by seventeenth and eighteenth-century Jesuit writers, testament to the ongoing centrality of Latin to the Jesuit educational endeavor.

The 20 volumes in Lippincott’s Ancient Classics for English Readers series, 1875. From Hathitrust.

The Librarian largely collected older European copies of Plautus, Terence, and Seneca in Latin. Four seventeenth and eighteen-century European editions of Plautus’ Comedies were collected (Geneva 1622, Frankfurt 1641, Amsterdam 1684, and Zweibrucken 1788), as well as a mid-nineteenth century edition of one of his plays – The Captives – which had been prepared for use by students by John Williams Proudfit. There was also a 1716 edition in translation. Copies of Terence’s Six Comedies are slightly later, but also from European publishers (Amsterdam 1686, Leipzig 1774, Basil 1797, and undated). Finally, Seneca’s Tragedies include an [unknown place of publication] 1617, Leiden 1651, and London 1823 editions. In addition to these European imprints, the Jesuits collected the 20 volume Ancient Classics for English Readers series published by J.B. Lippincott of Philadelphia in 1875 ,which included a volume of works by Plautus and Terence (no. 16).

The original c.1878 library catalog documents what books by Latin dramatists the Jesuits collected, while the many surviving copies in the collections of University Archives and Special Collections at Loyola  can give us a clue to what these books looked like and occasionally who owned them before the Jesuits. Four early Plautus editions survive today (1622, 1641, 1684, and 1788). At least two copies of Terence survive (1686 and 1797) and at least one of Seneca (1651). Works such as these would have seen active use in both university classrooms and gentlemen’s libraries. While surviving works are relatively clean of inscriptions by previous owners, the 1651 Seneca bears the inscription “E Libris Geo. Bent 1765” across the top first page of text.  The embossed cover of the 1684 Plautus includes an engraving of two lions flanking a shield with four lions, perhaps from a gentleman’s library. 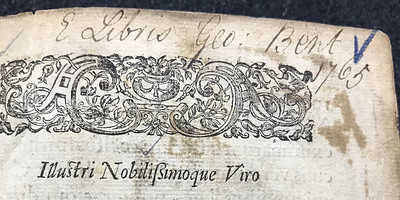 Previous owner’s inscription on a 1651 edition of Seneca.

Latin dramatists had a place within the curriculum and library collection at St Ignatius College. While they might have been outnumbered by other Latin authors, their presence is an important reminder of the place of drama within Jesuit education. Markings remind us their popularity was not limited to the Jesuits and Latin drama had a valued place in seventeenth-, eighteenth-, and nineteenth-century learned culture in Europe and the United States. The survival of so many copies speak to the value we continue to accord these authors to this day.

To learn more about Jesuits and Latin Drama, check out:

Many thanks to Ashley Howdeshell and Kathy Young of Loyola’s University Archives & Special Collections for their support of this scholarship and for making these materials accessible to students 150 years after the Jesuits first founded Loyola.