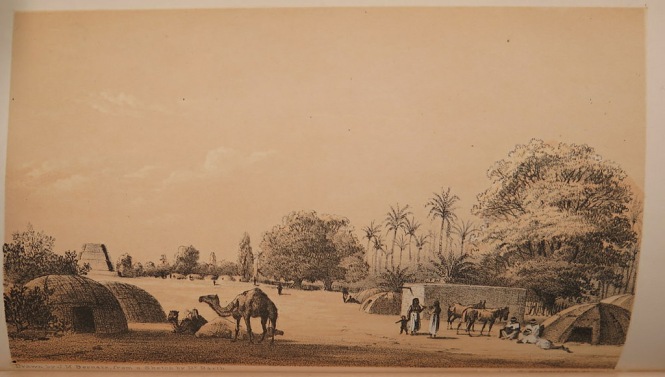 A plate from volume 5 of Heinrich Barth’s Travels and discoveries in North and Central Africa (London, 1857-58)

This summer rising sophomore Mark Neuhengen will be studying travel literature in the original St. Ignatius College Library catalog. Mark is double majoring in History and Religious Studies with minors in Islamic World Studies and Arabic Language and Culture. He is excited to join the JLPP team and to learn all he can about how nineteenth-century Europeans and Americans saw and wrote about other nations.

Ernest Hemingway, that icon of American literature, once said, “It is good to have an end to journey toward; but it is the journey that matters, in the end.” A quick overview of the “Travels” section of the c.1878 St. Ignatius College library catalog reveals a plethora of amazing and meaningful journeys. By looking at the destinations found in the titles, one can imagine the sights these European explorers must have seen in person, and readers experienced vicariously. One can only begin to imagine how explorers accustomed to the European and American countryside felt about exploring such exotic (to them) new lands as Palestine, China, Central Africa, and Iceland. 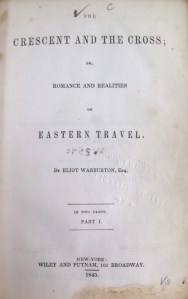 Eliot Warburton’s The Crescent and the Cross; or, Romance and Realities of Eastern Travel (New York, 1845)

While one can detect a sense of romanticism and adventure through the titles, one also anticipates the negative sentiments these authors might have held as indicated by their harsh and racist terminology. It is hard for me not to cringe a little at titles such as The Lands of the Saracens: or Pictures of Palestine, Asia Minor, Sicily, Spain and Wah-to-yah, and the Taos trail: or Prairie-Travel and Scalp Dances. While we might find this language outdated and derogatory today, I believe that it is an important window into the mindset of nineteenth-century world travelers. It will be interesting to learn about how European and American explorers and missionaries saw people who they deemed “non-western.” In my opinion, to learn how Europeans and Americans saw the “other” in the nineteenth century can help us learn about how the “other” changes throughout history. What was deemed the “other” in nineteenth-century America may not be the same at twenty-first century America, but we might be able to take what we learned from nineteenth-century Americans and Europeans and apply it to studying today’s “other.”

Another important thing I picked up from the book list is the lack of female voices. Whether this is due to the patriarchal nature of nineteenth-century society or the lack of women on these travels will only be discovered out through more research. If I had to guess the reason why there are no women writers, I would say that it was because they did not travel. Using the little preliminary knowledge I have, I would assume that husbands would be wary of bringing their wives to faraway and potentially dangerous locations. This sentiment towards women can be seen as a sign of the patriarchy. I am usually against broad generalizations, so it may be possible that the Jesuits did not collect the writings of female explorers. The reason for this may relate to St. Ignatius College originally being a men’s college, and the Jesuits wished the students to be familiar with male literature. In light of this, I’m interested to see how these predominantly male explorers portrayed foreign women. Did the same societal conventions shape their view? One can relate this back to the study of “the other” mentioned earlier.

A final aspect that I found enjoyable in the catalog was the inclusion of familiar American authors. Throughout the section I found works by Washington Irving, Henry David Thoreau, and Lewis and Clark. It is interesting that even by 1878 these authors were already becoming classic authors. While I am not familiar with him at the writing of this blog, the name Bayard Taylor appears nine times in a row. He should be someone to keep researching.

I believe that the Travels section of the library catalog will be an interesting one to research over the next few months. I have a feeling that it will be intriguing to see how these European and American travelers saw their world. It should also be fascinating to see what they felt was important to include and to ruminate on what they felt was unimportant. In general, I hope you will join me on my adventure into the world of nineteenth-century explorers and missionaries — and the teachers and students at a Jesuit College that read about them!